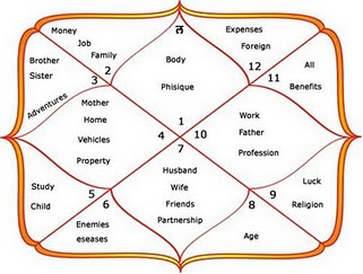 Many people hold a misconception about the Jyotish Vidya (knowledge of astrology), and as a part of that, they confine Jyotish Vidya within the edges of ‘an art of future telling and making future predictions’. However, those with a deep knowledge of this art, also consider it to be a science, much like other more accepted forms of science such as physics, chemistry, biology etc. The only difference between astrology and the above mentioned forms of science is that astrology has been a divine gift from the supreme power of existence.

Janam Kundli as In History

This gift appeared many years ago in the form of ability. People with high level of consciousness developed an ability to identify the impact of the changes and movements which different planetary bodies go through, on human lives. It is also said that ancient sages with high level of consciousness were able to attain a direct connection with the Lord Brahma (the creator of existence, according to beliefs of Hindu mythology), who initiated sages into the divine science of astrology. Then, these sages framed up principles of astrology, and started using them for the service of human benefit. Whatever we hold today with the name of Hindu astrology is completely an inherited knowledge as conveyed from generation to generation by the great ancient sages. This ability was passed on to the following generations in the form of teachings and learning.

Great sages such as Varahamihira, Kalidasa, Varunchi, Vashista, Vyas, Parashara, Venkatesa, kashyap Neelkantha Jayadeva, Ganapathi Satyacharya, Manitha, Jeeva Sharma, Bhaskaracharya, Aryabhatta, etc. form the very great squad which immensely contributed to the shaping up of the present of Hindu astrology, and eventually Janam Kundli and Jyotish Vidya as a part of it.

Janam Kundali is a part of astrology, which itself is a branch of Vedas। The knowledge of Vedas enables astrology to make predictions about the past, present, and future events of a person’s life, on the basis of the positioning of Lagna and planets in a Janam Kundali. Astrology has been divided into three major dissections, with the name of Siddhanta, Samhita, and Hora. Siddhanta is associated with the astronomical side of science; Samhita is related with making predictions for world events; and Hora is concerned with the astrological prediction making of humans and living objects.